If there’s one thing that easily separates the good singers from the great singers, it’s performing, and that’s why I figured it was a great idea to include an article about performance tips.

So let’s jump right into it and figure out what makes a good performer.

What Makes A Good Performer?

There are many different types of performers out there… some are wired with 80,000 volts of energy while others are completely chill… some are wild in their appearance while others dress in something 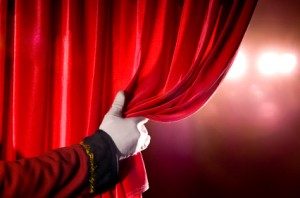 as simple as all black… but no matter what they look like, what they do while they’re on stage, or how they look, they all have one thing in common – they connect with their audience.

This isn’t going to shock anyone here, but we are all different people and we all like different things. Some of us prefer to see David Lee Roth jump around on stage, while others enjoy the tame, peaceful performance of Sarah McLachlan. So, the first necessary ingredient of being a good performer is knowing what your audience likes.

This may be a factor of trial and error, and it’s going to change from venue to venue. A different audience may warrant a different song choice, a different level of energy in your performance, and a different feel in the tone.

So, now that we’ve discussed what I consider to be the #1 most important rule of performance (knowing your audience), lets move onto something a little bit more specific.

First off, the moment you’re in plain view of audience, you’re performing. So, you’ve got to start acting like it. Performers in general must embody confidence and have a larger than life aura about them. So how do we create this? To me, it’s all about body language. Here are a few key things to look out for:

It’s said that the eyes are the windows to the soul, and I have to agree. They can also add or take away from a performance. If you can look your audience straight in the eye, confidently finish phrases without darting away or down, then you’re going to come across as much more confident than someone whose eyes are moving constantly or are often times looking down at the floor.

The way you move around the stage speaks volumes about your confidence. If you start walking and you don’t know where you’re going, then you’ll likely come across as unsure to your audience. The smallest hesitation when you start to move, or maybe when you’re deciding which way to go or even when stop walking comes across to your audience as unconfident. So whenever you move, know where you’re going (or at least act like you do) and never show that you may be unsure in your body language when you’re moving around on stage.

Mamma always told you quit slouching, and guess what… Mama was right! (as frustrating as it may be, she often is.) There are actually a lot of benefits to singers to maintain good posture, including creating more resonance space. But when talking about performing, it oozes confidence. If your shoulders are just an inch forward or up, then it sends a strong message to the audience. This is really more subconscious… they won’t know why, but they’ll know you’re not “feeling it” or maybe they’ll feel that you’re coming across as nervous.

I know this sounds ridiculous, but I’ve proven this time and time again with performers I’ve worked with. I’ve literally gotten raving emails from parents, saying something along the lines of, “I don’t know what you did, but whatever you did completely took her performance to another level!”

What was so funny to me is literally all I did was adjust her shoulders at most 2 inches down and back, and had her open her eyes slightly more. That’s how powerful it can be!

When I’m working with a student on performance, one of my biggest rules is, “No T-Rex Arms!!!” Most singers when they start performing are very closed off. They can sometimes fake the things I listed above, but if you gesture out to your audience and your elbow is locked into your torso, it’s going to look like a wimpy, tiny movement (hence T-rex arms). Obviously, this is the exact opposite of the “larger than life” aura that we’re striving for.

So the solution? Just extend your arm all the way out. Make strong movements. Just when you do so, keep your shoulder comfortably down so that it doesn’t look forced or awkward.

Finally, Don’t Be Afraid to Do Some Research

We’ve all heard the old saying, “Don’t reinvent the wheel,” but when it comes to performing, most of us try to do just that. Performers now a days have thousands of performances right at their finger tips to observe and learn from thanks to a nifty tool called youtube (This is a luxury we didn’t have back in my day, but at least then MTV still played music videos… I digress).

Anyway, I guess what I’m saying is with only youtube, a mirror, and some free time, you can both find a performance style you like and learn to mimic it in the mirror. It surprises me that so few people do this, but like I hinted at before… why reinvent the wheel? All you have to do is learn to mimic a few performers and you’ll be looking like a pro in no time.

Summing It All Up

Some people ooze charisma naturally, but if you’re not there yet, you can follow the steps above to help take your performance to the next level. Do it enough, and you’ll have your audience eating out of the palm of your hand in no time.

Best of luck to ya!

P.s. – If you’d like to receive more articles just like this one, then join our facebook page at facebook.com/singingtips. Here, you’ll get access to new articles weekly, and be able to ask questions and interact with other singers around the world.